So, with that last article about how plants (and, come to think of it, animal parts) could be used for various substitutions for potions or poisons or whatever you care to think of, I figure now would be a good time to start talking about some real-life plants that can either serve as inspiration for death and mayhem, or provide it all themselves.

And I’m not talking hallucinogenics, either.  We’re talking trees that reproduce by ballistics, migrate along the forest floor, meat-eating shrubbery, etc.

But I’ll save those for later entries.

For now, let’s talk about something you may have heard about, and also very likely underestimated, despite knowing that it comes from Australia of all places:

Yes, the Eucalyptus tree, that thing the Koalas eat.  Today, we’re going to talk about how a simple tree commits war crimes on the surrounding environment to thin out the competition.  What kinds of war crimes, you may ask?

Suffice it to say that forests of this simple tree genus (a member of the myrtle family, Myrtaceae) can turn a gentle countryside of the normal everyday horrors associated with the southern continent into a raging hellscape the likes of which even California would think is a bit too much.

See, the trees are known to produce certain oils.  This oil can actually help clear your sinuses really well, acting as a decongestant if you boil the leaves and inhale the steam (fun fact).  It also is useful in things like fragrance, cleaning, insect repellent, and fuel.  The trees produce so much of the stuff, in fact, that to quote Wikipedia: “On warm days, eucalyptus forests are sometimes shrouded in a smog-like mist of vaporised volatile organic compounds (terpenoids); the Australian Blue Mountains take their name from the haze.”

They also produce a high amount of litter (dead leaves/twigs/bark/etc on the ground), which doesn’t degrade that easily, covering the forest floor with large amounts of dry, combustible tinder to match with the fuel filling the air.  The bark of some species hangs in long thin (easily lit) strips loosely from the trunk.

You can see where I’m going with this.

These trees burn their competition (and themselves) alive because they can survive a fire better than their neighbors, or simply regrow afterwards better than anyone else. 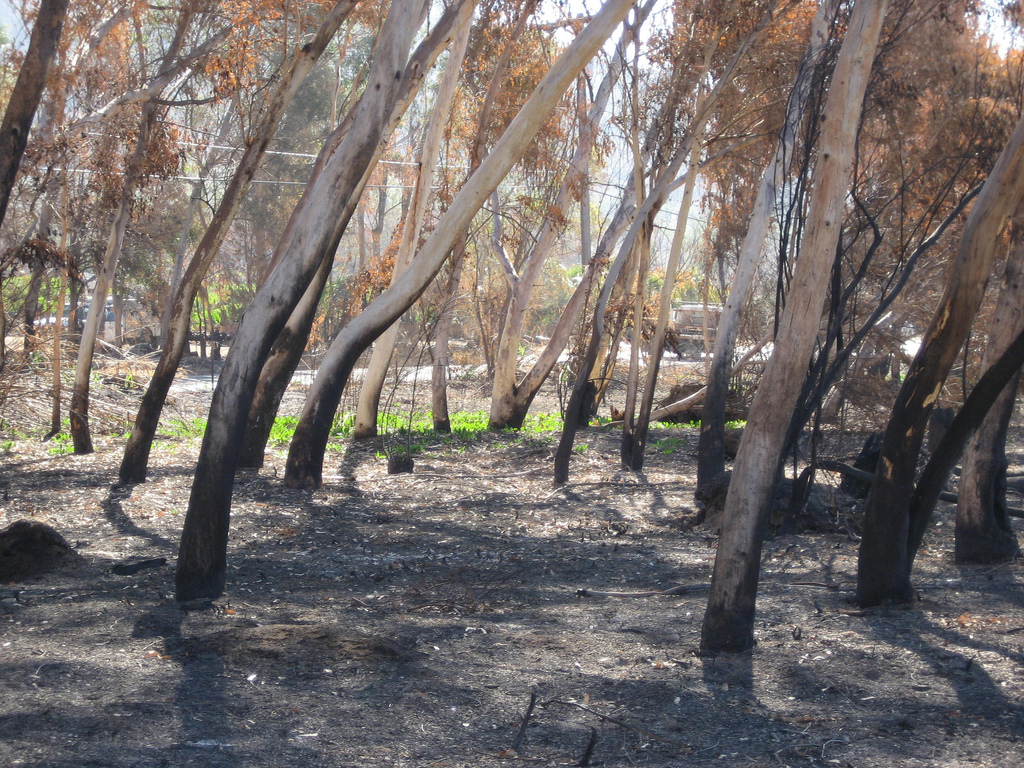 Their oil is so combustible that ignited trees have been known to explode, and the fire travels easily through the air-rich tree crown filled with oil-soaked leaves and fuel mist, as well as across the piles of tinder these things leave everywhere around them, sending burning embers flying far and wide.

Where do the Koalas go?  Honestly, I don’t know, but now I’m picturing were-fire-elemental Koalas and it’s both adorable and terrifying at the same time.

If you ever wanted to experienced the Plane of Elemental Fire but didn’t like the price those fancy wizards were charging for their Plane Shift spell, just put a volcano near a forest of these and have the elementals come to your players for a change.

If that weren’t enough to make them the blasted charcoal growths of the pit, some species also have been known to drop their heavy branches unexpectedly (even when not on or near fire), possibly injuring or killing people camping underneath.

One thought on “Powerful Plants”